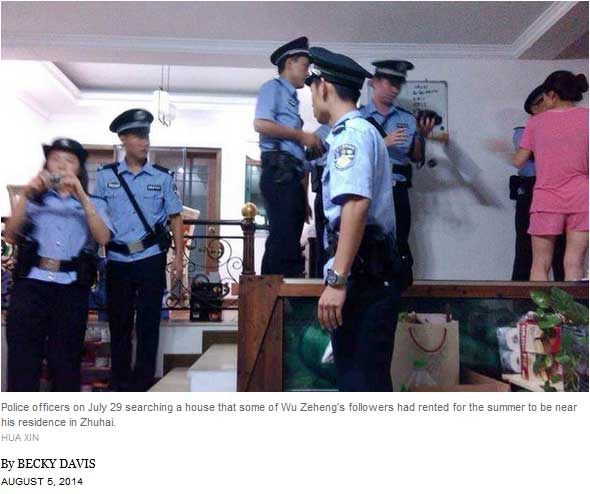 The authorities in the southern province of Guangdong have moved against a Buddhist sect whose spiritual leader has cultivated a growing cadre of followers both inside China and abroad.

Wu Zeheng, a Buddhist master who has long been at odds with the government, was taken into police custody last week after the police staged a coordinated raid on a number of businesses and living compounds run by his group, Huazang Dharma.

Nearly 50 people, 20 of them children, were detained during the raids, according to the group’s followers. While the majority have been released in recent days, Mr. Wu and 18 others are still being held at various detention centers around the coastal city of Zhuhai.

The crackdown on Huazang Dharma comes at a time of increasing pressure on organized religious activity outside the government bodies that regulate much of the nation’s religious life. Buddhism is one of the five officially sanctioned religions of China — the others being Taoism, Islam, Protestantism and Catholicism — but the Communist Party requires spiritual leaders to operate under the auspices of its “patriotic” Buddhist association.

In recent months, the Communist Party has sought to rein in some Islamic practices among ethnic Uighurs in the western region of Xinjiang and opened a campaign against more than a dozen religious groups it has categorized as “evil cults.” Since last spring, the authorities in the eastern coastal province of Zhejiang have forced scores of Protestant congregations to remove the crosses atop newly built church structures, provoking a number of violent confrontations between congregants and the police.

Last week, the American State Department, as it has since 1999, listed China as a “Country of Particular Concern” in its annual report on international religious freedom.

The current detention of Mr. Wu is not his first run-in with the Chinese authorities. In 2000, he was convicted of financial crimes, including “illegally operating a business,” and sentenced to 11 years in jail, according to the Huazang Center website. His followers say the arrest was retribution for an open letter he wrote to Chinese leaders calling for democracy and greater government transparency.

Although Mr. Wu has largely refrained from advocating political change since his release in 2010, his disciples say the Chinese government has taken notice of his growing popularity. In the last four years, Mr. Wu had drawn thousands of followers within China and across the world, largely through videos and writings he and his aides post online. Although the authorities have blocked his blog and microblog platforms in China, Huazang says that events organized by the group in recent years have drawn more than 8,400 participants worldwide.

It was not immediately clear what prompted the raid on the group. The government has not issued any public statements about Huazang Dharma, and those questioned by the police say the authorities did not suggest they thought the group was an illicit cult.

According to its website, the group calls on followers to perform a good deed each day and to fast several days a month and then to donate to charity the money they would have spent on food. The website also speaks of the group’s “commitment to the prosperity of the Chinese nation and world peace.”

Mr. Wu, who is also addressed by followers as His Holiness Vairocana Xing Wu, founded Huazang Dharma in the late 1980s and traces its teachings back to the earliest days of Buddhism. A number of followers believe he possesses healing powers and say the traditional Chinese medicine he prescribes can cure cancer and other diseases.

Nicole Ho, who lives in the United States and who credits Mr. Wu with saving the life of her ailing father, has been a devout follower since 1995. “His ability and level of wisdom is simply different from anyone else,” she said. “With Master Wu, you listen and feel good from head to toe.”

Mr. Wu had been briefly detained twice by the police in recent years, but his followers said the current detentions of him and his followers suggested the authorities were determined to crush the group.

According to several witnesses, the police entered Mr. Wu’s home in Zhuhai on July 29 saying they wanted to examine his residency registration papers and then took him away. A number of followers living in apartments in the same complex were also detained at the same time, including children who were studying meditation and martial arts. Meanwhile, the police in the nearby city of Shenzhen raided two businesses affiliated with Huazang Dharma and the homes of people working there.

One follower who gave her name as Cissy said she was stunned by the way the police handled the incident. She said the police took six children from an apartment in Zhuhai around 11 p.m. and held them at the station house until dawn. The youngest child, she said, was 11. “They asked about personal things, our families, when and why we’d come here,” she said in a telephone interview. “Whatever they ask, you must answer.”

Ms. Ho, who was recently in Beijing to lobby American Embassy officials on Mr. Wu’s behalf, expressed concern for her teacher and those still held in custody. “They won’t physically hurt you, but they’ll try to break you down, change your mind, and make your heart timid, like that of a slave.”

Those who were detained and released said they remained convinced that their group had done nothing wrong.

“Honestly, what I’m most concerned about right now is the state of our society,” Cissy said. “As I was leaving the police station, I asked the policeman, ‘Is it so hard to be a good person in today’s society?’ He didn’t respond.”